A Train Of Tritons

NETA! TODSF! TALIS! CBTF! Sounds like incantations from a Conan the Barba rian comic book, but if you're a membe of the National Triton Association (NTA)a 17-year-old group dedicated to keeping the 28-foot Pearson Triton off the endangered species list-you know exactly what these words mean. They are all acronyms for the four regional fleets: New England Triton Association, Triton OneDesign Class of San Francisco, Triton Association of Long island Sound and Chesapeake Bay Triton Fleet.

The genesis of the Triton is almost the stuff of legend: It was one of the first fiberglass production boats built in America (introduced at the 1959 New York Boat Show by Clint and Everett Pearson); the hulls are an inch thick (or so the devotees of this cult believe); it has the ability to weather any storm (a few years ago, one finished fourth in the Singlehanded Transpac) and it's as manageable as a dinghy (elderly couples don't feel overpowered by the gear). As the slogan of the NTA newsletter The Trumpet says, "Tritons Are Forever."

The last Triton was built in 1967, the culmination of nine years of refinement similar to the evolution of the Volkswagen Bug. Some say they got better, some say theygot worse, butall agreethateach and every Triton is a great boat. The present tense is important, because Pearson Yachts can account for all but a dozen of them. The NTA rolls include the alpha and omega of the fleet, from George Wolga'5 Aglow W) to Richard Schmitt's Wanderlust (#709), both in New York. One thing is certain, if. those other dozen have sailed on to the great Triton Association in the Sky, they did so at the hands of cads and heretics. Unlike some more modern boats built with "state-of-the-art" technology, the Triton won't rot, peel or self-destruct. Nor will'it easily succumb to fractures or fire bombings. It takes the willful intent of insurance fraud or the doing in of a recalcitrant first mate to send a Triton to her eternal peace.

So it's not surprising that once each year the calls of NETA! TODSF! TALIS! and CBTF! rally the tribes together for a week's cruise-in-company, information, racing and lots of "Triton talk." The 1983 annual Triton cruise began in Stonington, Connecticut, and included visits to the Mystic Seaport and rustic West Harbor at Fishers Island, a two-day layover at bustling Block Island and terminated at Newport, Rhode island, for an afternoon of America's Cup race watching and a raft-up in the comparative quiet of Brenton Cove. The Long Island Sound/Rhode Island Sound itinerary guaranteed participation from TALIS and NETA members, and the latter, organized just five years ago by Bostonian Bill Bell, seemed particularly anxious to start making their own "good old days."

As the cruise commenced, the humid July weather spelled light winds and calms broken once by a summer thunderstorm. The pace was slow; all were in the cornpany of old friends.

At the second stop on the cruise, Mystic Seaport, the Tritons rafted three deep along the quay. As the morning sun rose hot and heavy over the still waters of the Mystic River and the crews congregated ashore, it became apparent that not every boat on the cruise was a Triton. At first glance it wasn't apparent how these imposters had needled their way into the armada. But it soon became obvious that the owners of Innistree, a Luders 33, Turnbestere, an Albin Vega, and Leibchen III, a Pearson 32, were former Triton owners who firmly believed there was no better way to spend a week's vacation than tagging along with the old gang.

In the shade of Talisman's awning, Jack Niedringhaus (#520), a CBTF visitor crewing on NTA Commodore and cruise coordinator David Sykes' boat, told tales of Tritons and immediately captured the rapt attention of listeners. 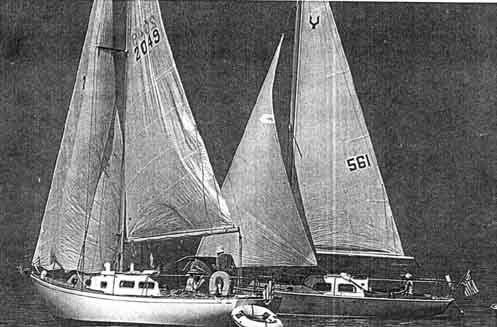 Innisfree, a Luders 33, owned by former Tritoneer Dick Gordon, mixes it up with David Sykes' Talisman at the start of a race to Block Island.

"There are about fifty Tritons on the Chesapeake," he said, "ten to twelve on the line for the weekend races. There are three," he continued, resting his tall, dignified frame against the cockpit coaming, "that either burned or sank."

This was oral history and Jack was the memory of the tribe.

"One blew up in a yard -gas fumes in the bilge," he said. "A carpenter from the Eastern Shore bought the cadaverous hull, fixed her up and sails her to this day-the only Triton with a wood house.

" Another burned at the owner's dock. The fire was caused by his kids making lunch on the alcohol stove," Jack continued, his eyes intent on earning everyone's respect for these honored forefathers.

"I bought the boat, but sold it to a naval architect who managed to finagle a better price than I could from Pearson. She, too, is still sailing.

"The third sank at sea," he said, "on a trip to Bermuda. The owner saw what he thought was a U.S. Navy escort, and radioed for a position fix. The ship changed course and came over-it was a ship of the Dominican Republic given to them by the U.S. They couldn't understand each other on the radio, so three or four men were put aboard the Triton, the crew was removed and they began towing her to New York at 20 knots. There was nothing the owner could do. They sent him below, and when he looked again, his boat had gone under."

Sykes, 53, an engineer at Raytheon, added a postscript to Jack's tales with a yarn of his own, a "stretch" edition Triton, as it were.

"The last thing you need on a Triton," harrumphed Jack.

Sykes (#561) reluctantly took over the organization of this year's cruise from TALIS Commodore Art Hawes, "Art really knows how to run a cruise," Dave said humbly. "As a matter of fact, we've copied his materials shamelessly. If a newcomer didn't know how to properly raft-up, Art was always there to show them, as well as to explain all the instructions and diagrams in the cruise pack."

This sort of Tritonly love has gone a long way toward keeping the group cohesive, active and on the go. Hawes, who chose this year to lead a renegade bunch of Triton gunkholers to Cape Cod instead of joining the annual cruise, is almost as revered in the NTA as Triton designer Carl Alberg. On the other side of Alberg in this trio of NTA champions is Phyllis van Vleet of California's TODSF. Phyllis, the queen mother of the NTA, was the prime mover in organizing the 100 Tritons built in Sausalito (Tritons with masthead rigs, no less, instead of that traditional Triton trademark, the seven-eighths fractional rig) and ran years of Triton regattas on San Francisco Bay.

Triton owners like to race and are proud to recall the once honorable showings they made under various rating rules. Informal races are regular events of any Triton cruise, though some take them more seriously than others. On this cruise, Ted Kirchner's dark blue Kathleen (#445) was quick upwind, a bit surprising since he had a new, smaller, roachless mainsail. Downwind, however, the boat suffered from the lack of sail area, and during the three-legged Fishers island Sound Race, Ted threw up double headsails to compensate. He won the race, but lost on protest. Later, anchored in West Harbor and washing dishes in his cabin, he gaid, "We're not racers, but we do like to get the most out of our boat. We appreciate performance." Of this there could be no doubt: Each evening before bed the Kirchners heave 13 bags of specialized sails from the forecabin onto the deck.

The race from Fishers Island to Block Island was a bit of a dud. In lethargic air, boats powered single file up to the start, the Mo(A) whistle and committee boat. When the gun sounded, the fleet didn't move; in fact it would have drifted backwards if the tide hadn't been slack. Eventually the wind picked up and Ellendale, Talisman and Downeast took the ribbons at Block Island. 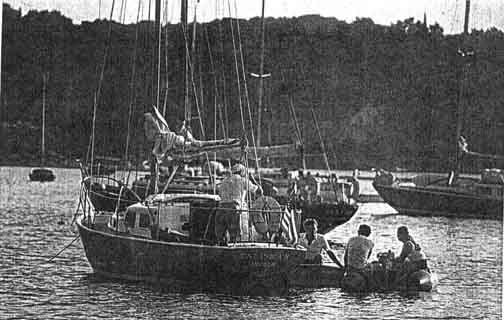 NTA Commodore and cruise organizer David Sykes, in dinghy, chats and checks up on other members of the fleet at Fishers Island.

A gale blew up while the fleet was anchored in close to Champlin's Marina in the Great Salt Pond, but with their low freeboard and full keels, the Tri tons stayed put through a night that saw other boats dragging anchor until dawn. Tucked in close to shore where he could get more scope on the anchor, Chuck Hoffman and his Ellendale (#694) seemed unconcerned. Alone for the moment while he awaited a new crew, the Episcopal pastor of a Woods Hole church made a quiche and salad dinner for himself and explained some of the differences found in late-model Tritons.

"Somewhere after Hull #600," he said, "the cabin liner was extended forward to the bow. Teak toe rails were added as well as about two inches of headroom in the forward cabin. I think that's why you don't see any Tritons after #600 with forwardfacing ports in the main cabin."

Like most other Triton owners, Chuck has learned to keep things simple-there just isn't room to cram in chart tables, dinettes and surplus bedrolls, despite the fact that families of four and five have spent entire summers cruising and living aboard. The two-burner alcohol stove on

Ellendale perches on the port-side shelf above the side-opening icebox (a poorly insulated affair that's first on the fix-it list of most owners). To starboard, there's a sink that barely extends from under the bridge, and below it are a few drawers that must be self-installed to utilize the few cubic feet of wasted space overlooked by Pearson. A drop-in table with a removable leg fastens to the bulkhead separating the main cabin and head, and forward an insert cushion converts the V-berth to a king-size playpen.

Among the fleet, most boats had been painted, some with shiny, two-part polyurethanes such as Awlgrip and Interthane. New pulpits and lifelines were common. The coamings were oiled or varnished. Cockpit grates were the rule, dirty nonskid the exception. Clearly, these are folks who care about their boats. Many were purchased as stepping stones to larger, offshore cruisers, but as the years crept by and the dreams succumbed to the realities of family life ashore, many Triton owners found it more practical to upgrade than to up-trade. There's something about loyalty, too, because, like the family pet, it's hard putting a Triton to sleep.

Cass and Nora Chomicz, Long Island schoolteachers aboard Constant C's with 'their 14-year-old daughter, Margaret Rose, had similar sentiments. "It's nice to be with people who've made the same mistakes and are willing to tolerate your ignorance," Cass said. The Chomiczs owned a Pearson Electra for three years. "The only reason we sold it was I couldn't stand up in the cabin," Cass said. "The Triton," added Nora, "is the ideal boat for the family."

Margaret Rose was the only dissenter. "I want one bigger-a Hans Christian," she said smiling from her supine position on the cabin top. Nine boats made it to Newport, Rho4e Island, for a raft-up on Odyssey's mooring. At cruise's end, they left Newport harbor, some to hightail home in time for a Monday morning deadline at the off ice, others to continue on in twos and threes for another week. Triton owners believe in the eternal recurrence of all things, and they'll anticipate The Trumpet mailings flooding in next year, when the words NETA! TODSF! TALIS! and CBTF! will again call the faithful to join hands and sing praises to one of the best things that's ever happened to them.

At Mystic Seaport, some of the kids find feeding the ducks more interesting than listening to 'Triton talk' with their parents.