Reefing from the cockpit

Reefing from the cockpit

If there's one thing that we've done to Dogstar that's a definite improvement, it's being able to reef from the cockpit. It really encourages us to "reef when you first think of it". It is not unusual to reef and un-reef three times in a single afternoon as we sail around San Francisco Bay. That's because it's so fast and easy to do the right thing.

Overview: We use a two line reefing system. One line pulls down the tack of the sail near to the gooseneck and the other line hauls down on the clew. In addition to the rigging described here, you need to be able to work the mainsail from the cockpit.

To reef, you start with the boat sailing on a point that allows you can dump all the wind from the main by easing the sheet. Given that, the procedure is:

1- Ease the main so it is completely luffing.

2- With one turn of the main halyard around the winch, raise lever on the rope clutch securing the halyard.

4- Wrap the tack reefing line around its cleat and then retighten the main halyard with the winch and secure the halyard with its rope clutch.

5- Pull back on the line that hauls down the clew reefing cringle. While you're doing this, you can have the tiller between your legs to steer to keep the main's luffing.

6- When the tack is hauled down, secure this line to the cleat, haul in the main and continue sailing.

With a little practice you can do all this in about 30 seconds.

To unreef: Start by sailing on a close reach or close hauled. Ease the main to dump all the wind from it. Uncleat the two reefing lines. Raise the main with the winch. 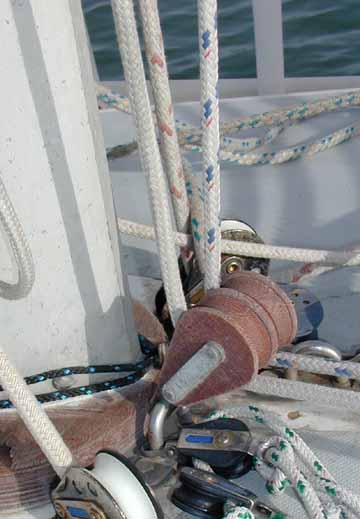 Describing the reefing system starts with an old brown phenolic double block attached to a padeye behind the left side of the mast. The padeye is through bolted just behind the mast support beam under the deck. In this photo the line without any marking reefs the tack while the line with blue and a bit of red reefs the clew.

The padeye also has blocks for the cunningham adjustment attached to it. 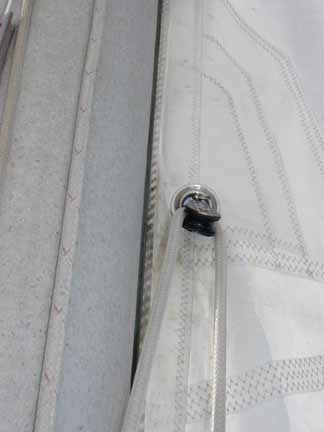 The line for reefing the tack runs up to a small block in the cringle that you would normally put around a reefing hook. The block is attached to a large stainless ring on the other side of the cringle which keeps it in positon. I guess you could also hook the ring around the old hook if you needed to. 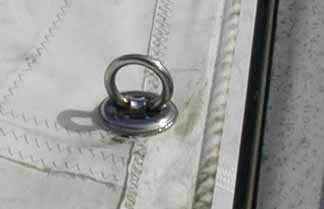 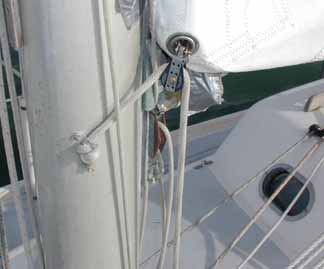 The free end of the reefing line goes down to an eye which is screwed onto the mast. This is what it looks like when the tack is reefed.

Our original equipment mast has several cleats on it that only serve to hook lines when you run all the rigging aft. Rather then do multiple cleatectomies, we cover them with duct tape. Works great.

One annoyance we had to deal with was the fact that the original equipment sailtrack was not long enough to allow the lowermost slide to come down low enough to reef. At first we dealt with that by not putting on the lowest slide. Later, we bought a section of sailtrack and attached it, lengthing the track by the few inches needed.

On the whole, this was not a pretty job because there was the old track for the sliding gooseneck that we had to angle over, filling the gap with one of these "miracle epoxies" you find in hardware stores. But it works...

BTW, the gooseneck is now "fixed" in position on this slide by pieces of line. We've been meaning to do something more permanent, but haven't gotten around to it. 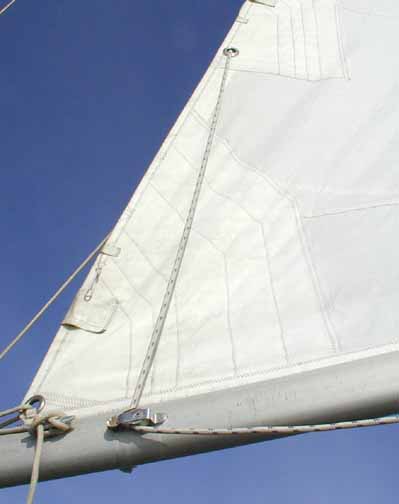 The line for reefing the clew runs along the boom to a block screwed into the boom with stainless steel sheet metal screws. The line goes up from the block to the clew reefing cringle and back down to a cleat that was original equipment on the boom. The small tuft of stuff coming down from the back of the boom is the stopper knot on the other side, showing where that attachment is made. 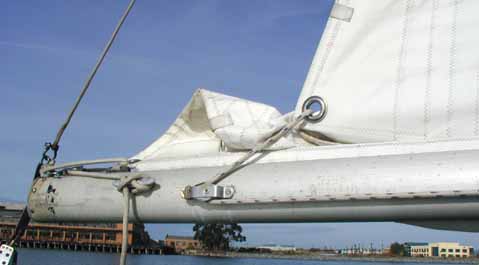 This is what it looks like when reefed. The two part tackle formed by the reef line pulls back as well as down. The backward pull is important for keeping the reefed sail flat. 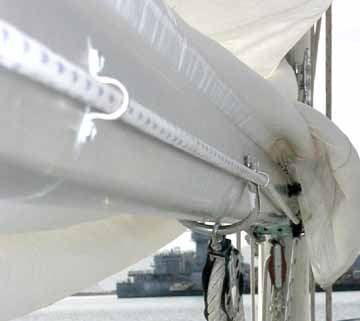 A pair of small pad eyes screwed to the boom with stainless sheet metal screws keeps the tack reef line from drooping all over the place.

This is how we attach the turning block for the tack reefing line. It's lashed to the end of the pin that allows the boom to move up and down. This pin also holds the reef hook that we no longer use.

The lashing may seem flakey, but it has held in as much wind as we have ever seen on San Francisco Bay.

We replace it every couple of years. 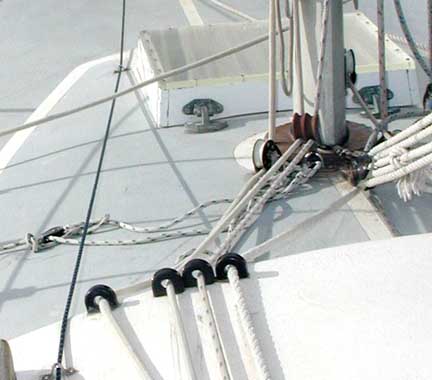 The reefing lines come back from the brown double block, at the left base of the mast, thru a pair of plastic fairleads. The fairleads are forward enough on the doghouse to keep the lines from rubbing on it when they are taught. 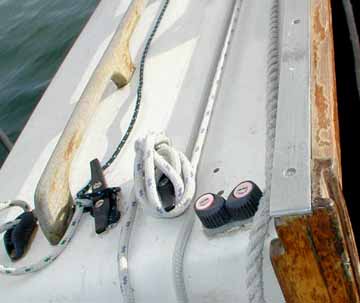 The reefing lines are secured by wrapping them around a single cleat bolted thru the top of the doghouse, by the cockpit. There's no winch since we seem to be able to get the clew quite tight without one. A pair of clutches for the reefing lines would be an improvement.